On a recent weekday evening, I rushed downtown with a big box containing a seersucker suit my husband ordered online for his brother's upcoming wedding. The size wasn't quite right; our talented and very honest tailor, Misook at Superb Custom Tailors, recommended we exchange for a better fit before alterations.
So there I was, after a little public transportation adventure. It was 7:05. My husband was supposed to meet me momentarily at the store. I saw an Audrey Hepburne-esque brunette with a navy sweater jauntily tied around her shoulders holding the door open for an exiting customer. I looked at the hours posted: NOOOOOoooooo, closes at 7:00?!? I could have sworn the website said 8:00!! I frantically texted my husband and pondered when we could possibly get back to do the exchange.
I asked the smiling saleswoman who was careful to make eye contact with me before she locked the door, "Do you really close at 7? Your website said 8!"
She said, "I'm so sorry. I will make sure we fix that! I would let you in, but all our registers are turned off."
I kept my maniacal texting.
Very quickly, the saleswoman returned and re-opened the door, "Come in! There's one register still on! What can I do for you?"
I started explaining how we got this suit online and it didn't fit, and we needed a different size we thought, but I wanted my husband to try on the other size before I handed in this one because I didn't want to get stuck without any suit for him to wear in his brother's wedding, blah, blah, blah, panic, panic...
The kind woman peeked at the box in my sweaty hands and kindly prodded, "Well, this says Jos. A. Bank on it..."
I did a double-take. I realized why the hours posted on the door and the hours posted on the website disagreed: I had come to the wrong paragon of preppy apparel. I was in Brooks Brothers, not Jos. A. Bank!!!! (This isn't quite as stupid as it sounds; they are just across the street from each other. But it is still REALLY stupid.)
So I have to commend Lisa, the kind woman at Brooks Brothers. Lisa, thank you for letting me in after your store was closed. Thank you for not contradicting me when I said wrong things about your website. And most of all, thank you for being so nice about my mistake! You almost convinced me I wasn't a complete doofus. Your customer service and people skills are superlative!
Posted by TSquared at 10:54 AM No comments:

It's pretty crappy when you go to take a shower, only to realize that your hot water heater has died. And is leaking all over your basement.
What to do? If you're in Seattle, call Seattle Plumbing Co. Evidently there are a few businesses that have Seattle Plumbing in their names, but make sure you go for the one with Evan Conkling at the helm.
Evan picked up the phone right away and started talking us through the situation. He made sure we'd turned the water and gas off to the heater, so we weren't adding to the problem. It was the weekend, and he wasn't able to get someone to us right away, so he offered us references to other plumbers if we wanted our solution pronto. That gesture was so open, so honest, and so thoughtful, we decided it was worth the wait (and a cold shower) to go with Evan's company.
We scheduled an appointment. He asked us for the model hot water heater we had, and told us he would have a replacement ready. No upsell, no excuses-- just quick, easy replacement.
Seattle Plumbing Co's employee arrived at our door two minutes before the appointed time-- so he could ask where we would like him to park before he started. He worked independently, carrying our old hot water heater out and the new one in all by himself. Quiet, strong, dependable.
There was no, "Well, this hose will need to be replaced... and this concrete isn't ideal..." the way things usually seem to go when we've had work done before. The man came in, did the job well, cleaned up, and let us get on with our lives.
The price was very good, the work was professional, but most of all, the whole process was just simple and easy. THANK YOU, Seattle Plumbing Co.! It's like they could tell that I was all ready to cry in my bathrobe, but they knew I didn't have to. Things weren't that bad after all!
Posted by TSquared at 10:19 AM No comments:

The A-Team of the Sea--a Review of "Shell Games," by Craig Welch 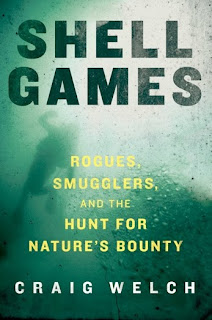 Yes, this is a book about people who steal giant clams.


It’s also about grizzled cops, iconoclasts who sneak around in dockside bushes at midnight with surveillance cameras, saying “fuck you, man” to bureaucrats, resisting much, obeying little. They are Edward Abbey with a badge.

The smugglers, charismatic, diverse, and technology-driven, have set their sights on the geoduck (pronounced “gooey duck”), the largest burrowing clam in the world, and one of the most beautifully-grotesque creatures you’ll find in the Northwest. (Picture a clam too large for its shell, and then append a giant, fleshy squash to its bulk. Or, embrace your baser instincts and think about a necessary appendage of the male anatomy, multiplying it in size by two or three—for some of us—and by more, for others). Crews set out at dusk on dark boats, keep the noise muffled with pillows and insulation, and send divers down to harvest. The geoduck, on the seafood black market (which is a real thing), is almost priceless.

If overfishing serves a purpose, it must be to demonstrate that marine ecosystems are fragile. A high geoduck population, as well as other bivalves (clams, mussels, and oysters) was proving—in its fast decline—beneficial to the waterways of Puget Sound. No geoducks, unclean water. 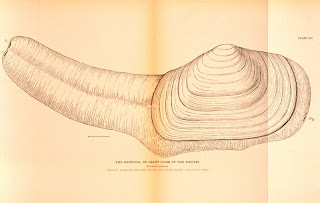 Enter, then, Wilderness Warrior Ed Volz, a subterranean agent of the feds who made his living chasing elk-antler thieves and eagle-talon poachers. Volz hunts the hunters, and it was clear that illegal harvests were threatening the marine wildlife of the Pacific Northwest. He was asked to form a crew, an A-Team (of the sea). Their goal was to seek out and track what turned out to be a major crime syndicate, lead by “The Kingpin,” a man who called himself “Geoduck Gotti.”

Volz’s crew of bearded outcasts and mountain men had powers of deduction and a severe work ethic. They gave up quiet nights at home to sit in their parked trucks doing stakeouts on waterways. They climbed seaside bluffs at midnight for clear views of pirate boats. And then, the dark side of the job took hold. They went undercover as black-market dealers, set up illegal transactions, and engaged in old school shake downs. Seafood pirates made deals, feeding a burgeoning Asian market. They assassinated people…over clams. And Edward “Hannibal” Volz (not a real nickname), walked a thin line of the law—like any half-vigilante worth a damn—in order to drown the whole operation.


This is a work of almost pure nonfiction, taken from interviews with the agents and those they hunted down. The story sheds light on a fascinating part of the criminal justice system, our own Northwest ecosystem, and the criminal world. Author Craig Welch, chief environmental writer for the Seattle Times, introduces us to the geoduck, its ocean purpose, and the greater environmental implications of tampering with it (the story also involves trafficking in bear gall bladders and butterflies, crab-thieves, and poachers of baby leopard sharks, offering a more rounded view of wildlife poaching).

Shell Games is a truly wild story about the detailed problems of the fishing industry, its black-market underbelly, and the truth about what happens when we rob nature. We go to prison.
Posted by sal paradise at 4:04 PM 1 comment:

The Missing by Tim Gautreaux

I love a book with an absorbing atmosphere, a book that transports me fully to some other place (and often some other time), and makes me feel as if I am a part of a completely new and foreign world. The Missing is one of those books. It begins in the days just after World War I when Sam Simoneaux is helping to clean up the battlefields in France, then moves to his tenuously happy life in New Orleans. When a momentary lapse allows a child to be kidnapped he starts out on a quest to find her and reclaim that small bit of post-war peace. That is, of course, easier said than done. The book takes place on a concert boat moving from port to port on the Mississippi River, on the streets of New Orleans, and in the swampy woods of Louisiana and its surrounds. If Gautreaux had only managed atmosphere, though, this wouldn’t have been as great a novel. He also has wonderful characters and a fascinating story. This is absolutely one of my top ten books of 2010. ~Lillian
Posted by Unknown at 7:33 PM No comments:

Someday this will be an awesome site devoted to only positive reviews of things.
Posted by Unknown at 3:32 PM No comments: